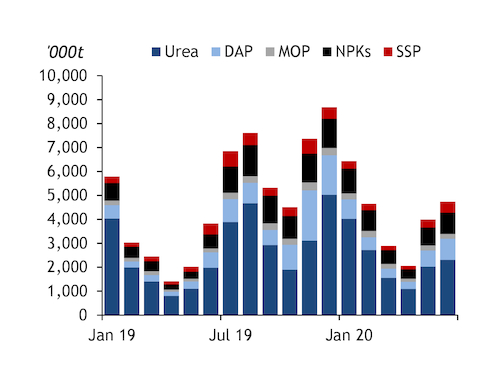 Strong agricultural fundamentals have spurred end-user fertilizer buying, with farmers raising crop sowing acreage so far this kharif season, running from April-September. Crop sowing has risen to 13.1mn hectares (ha) as of 19 June, up from 9.4mn ha at this point last year. Sowing acreage of the oilseeds and cotton crops has outstripped last year's levels, up by around 1.27mn ha and 1.06mn ha, respectively.

The country's meteorological department had lifted its projections for the monsoon, which usually occurs from June to September, raising it to 104pc of the long period average (LPA) of 88cm on 1 June.

The upgraded forecast appears justified with rainfall this month outstripping typical levels, hitting 141.5mm as of 23 June, compared with an average of 114.2mm at this point in the season. Rainfall in Goa, in central India, has been particularly heavy, hitting 966mm, up from standard levels of 651.1mm.