Mosaic Co.’s phosphate mine in Fort Meade, Fla. The company was the worst performer in the S&P 500 on Tuesday. PHOTO: TY WRIGHT/BLOOMBERG NEWS

Farm-supply companies have fallen this week after Beijing said it would suspend all imports of U.S. agricultural goods, a retaliatory measure to President Trump's decision to impose new tariffs of 10% on roughly $300 billion of imports from China.

In addition to trade woes, fertilizer companies have been hurt by declining sales as U.S. farmers in the Midwest faced persistent wet weather this past spring.

Mosaic's stock slid 12% in early afternoon trading Tuesday, on pace for its biggest one-day drop since July 2013. The company, which cut its full-year earnings forecast following severe flooding in the U.S. Farm Belt, was the worst performer in the S&P 500, with shares headed for a fresh 52-week closing low. 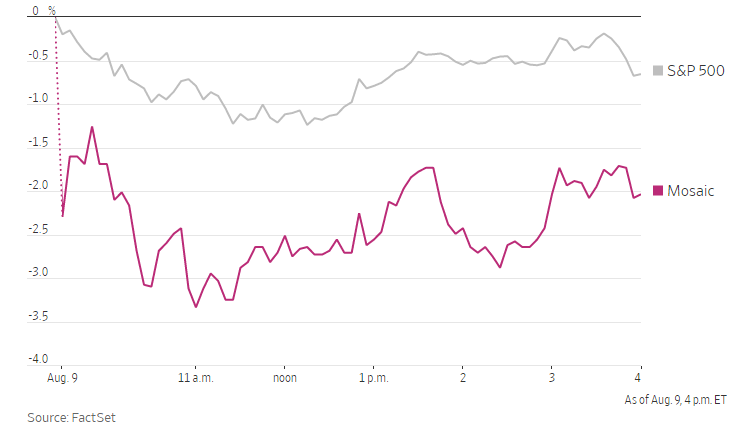 The losses spread to other fertilizer makers including Nutrien Ltd. and CF Industries Holdings Inc., which fell 4% and 0.5%, respectively. Meanwhile, U.S. farm-equipment maker Deere & Co. and chemical companies Bayer AG and Corteva Inc. have each dropped at least 4.3% apiece so far this week.

Heightened tensions between the world's two biggest economies have revived worries that the trade battle could hinder the decadelong U.S. economic expansion, some analysts and investors said.

Trade and weather have already been weighing on the incomes of U.S. farmers, which have been hurt by lower overseas purchases of U.S. corn, soybeans and other crops. This is expected to crimp sales of fertilizer and tractors.

These stocks may not recover soon.

"We don't think a trade deal will get done before 2020, therefore we're recommending that investors stay away from trade-sensitive areas of the market such as agriculture even though these companies are getting cheap, " said Matthew Granski, director of strategy at Miracle Mile Advisors in Los Angeles, which has $1.7 billion in assets under management.

By Jessica Menton
Source from: The Wall Street Journal